The unrelenting pursuit of perfection forms the basis of the savage, visceral horror film that is Black Swan, with the quest evident both on and off the screen. As the narrative from Mark Heyman (assistant on The Fountain), Andres Heinz (director of Origin Of The Species) and John J. McLaughlin (writer of Man Of The House) unfolds from the fancy footsteps that accompany the feature’s metaphorical opening sequence onwards, the audience bears witness to Nina’s and Darren Aronofsky’s single-minded determination to conquer their art forms, with both succeeding.

Like the demanding coming-of-age journey thrust upon the lead player as she attempts to master the metamorphosis between the positive and negative incarnations of Tchaikovsky’s heroine, the film too charts the director’s dance with – and foray into – the dissection of duality. Weaving in influences of David Lynch (Mulholland Drive), David Cronenberg (Videodrome) and even David Fincher (Fight Club) to craft a suspenseful psychological meditation on the nature of anxiety on one hand and an intelligent and riveting ballet melodrama on the other (worlds away from Robert Altman’s The Company), Aronofsky’s command of cinema transcends his earlier works (even excellent thematic compatriot The Wrestler) as he deftly demonstrates the depth of difference between the precision of control and the uncertainty of passion that lies within all of us.

Of course, despite the director’s undisputed prowess – evolving over the course of his career to culminate in his latest crowning achievement – such a richly masterful final product may not have eventuated without the mesmerising lead performance that goes with it. Although Oscar winners Rachel Weisz (Agora) and Jennifer Connelly (Creation) were previously linked to the project, it is impossible to contemplate the magnificence and menace of the operatic film without the award-winning Portman (currently monopolising the 2011 best actress Academy Award race in what has rightfully been called the best work of her career) at its centre.

Effortlessly encompassing the at times apologetic and uncertain, at others despondent and dejected Nina with innocence and inhibition as well as hints of madness and mania, the talented thespian perfects the portrayal of a protagonist forced to rebel against a lifetime of structure by breaking down as the only way to break through. Embodying Nina’s inner turmoil through her physicality as much as through her effortless emotional range (essaying everything from hopeful to haunted and back again), Portman’s fragile form (whittled down through intense sessions of ballet training) acts as a canvass for the character’s mental manifestations, with the boundaries both break in search of validation through the ultimate act of artistry indicative of Nina’s and Portman’s standing within and commitment to their respective crafts.

As astounding as Portman is in the impenetrable main role, and as accomplished as Aronofsky’s voyeuristic vision of the bewildering and brilliant world of ballet is, both are made better by their existence alongside other quality components. For the celebrated actress, her inclusion in a cast that also features the impeccable-as-always Cassel as her brazen mentor, the harrowing Hershey as her villainous mother, the surprisingly impressive Ryder as her fractured fallen idol, and the revelatory Kunis (an awards dark horse) as the sultry trigger for her descent from sanity, only serves to lift the resonance of her resulting work.

Similarly, the innate talent of the fantastic filmmaker in helming the urban horror tale is heightened by Matthew Libatique’s (Iron Man 2) breathtaking cinematography, Andrew Weisblum’s (Fantastic Mr Fox) frenetic yet free-flowing editing, and Clint Mansell’s (Moon) sumptuous score (augmenting a unique take on the original music with tracks the Chemical Brothers, in the composer’s fifth consecutive collaboration with Aronofsky). When viewed as a whole, such successful acting couplets and consummate crew contributions help to enact the thematic undercurrents and enhance the composition of what may well be one of the best films of 2011. Like the lyrical production at its centre, the cut-throat world it consists of, and the fearful figure that comprises its crazed yet confined subject, the beauty and the horror of unnerving and experiential thriller Black Swan is enchanting and devastating in equal parts. 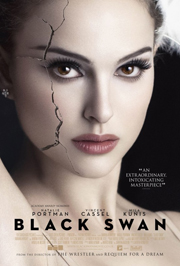