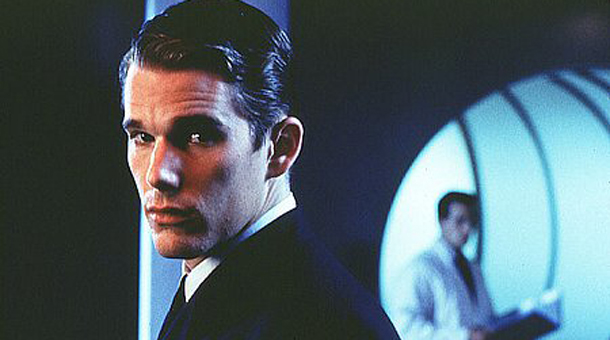 Procreation is a popular cinematic subject, informing all manner of inane comedies about the desire for and perils of parenthood. Spanning a variety of efforts perhaps best characterised as the good (Knocked Up), the bad (The Back-Up Plan), and the ugly (Motherhood) of the genre, there seems to be no end to the attempted cultivation of laughs at the expense of all elements of reproduction. Yet hidden behind the sex jokes and nappy gags there lurks a serious side to the propagation of the human species, often ignored by the filmmaking fraternity. The fantastic A New Tomorrow: Visions of the Future in Cinema program currently screening at Brisbane’s Gallery of Modern Art includes two dystopian features that delve beyond the humour to explore the reality of the dichotomy of both unwanted and desperately needed offspring, courtesy of Andrew Niccol’s 1997 effort Gattaca and Alfonso 2006 offering Children Of Men.

Set in the not too distant future, Gattaca tells of a world in which procreation has been reduced to a science. Rather than take their chances with the genetic lottery that comes with traditional methods of conception, prudent couples instead consult medical professionals to create offspring composed of the very best parts. As a result of the prolific use of such unnatural selection, discrimination based on genetics has replaced racism and sexism as the primary forms of exclusion, favouring the vitros / valids / made men against the uteros / invalids / faith births. For those unlucky enough to have been created through the intimate act of love rather than the clinical test tube technique, society is far less kind. Destined to become cleaners rather than astronauts, suspected of being murderers rather than bystanders, and declared worthless beyond a pre-determined (at birth) use-by date rather than given a lifetime to reach their possible potential, they form the new underclass in a global community ruled by blood.

Vincent Freeman (Ethan Hawke, Brooklyn’s Finest) is one of the many citizens classed as “invalid”, with an unacceptable likelihood of heart failure touted as the reason for his inferiority. Daring to dream beyond the confines of his allocated station, he subverts the societal norms to become a navigator at the prestigious Gattaca Aerospace Corporation. Assuming the existence of the “valid” but wheelchair-bound Jerome Morrow (Jude Law, Sherlock Holmes) with the utmost dedication, Vincent excels as only he believed he could. Selected to lead the next manned mission to Titan, his dream of leaving the injustice of earth behind appears in his grasp until the director meets an untimely end. With police investigators (Sunshine Cleaning‘s Alan Arkin and Space Cowboys‘ Loren Dean) scouring the Gattaca compound for any trace of one unworthy of its status, only the DNA in stray skin cells or rogue hairs could betray his real identity. As he forms a romantic alliance with co-worker Irene Cassini (Uma Thurman, Motherhood) – Gattaca’s liaison with law enforcement, Vincent’s manufactured reality stands on the precipice of exposure courtesy of limits of his genetic disguise.

In his debut film as both a writer and director, Niccol’s bleak vision of the future of procreation provides a cautionary tale for an age increasingly obsessed with advancements in biotechnology. Bearing greater resonance after multiple viewings and increased significance in a more modern context, the intelligent sci-fi effort combines the fears and facts of eugenics as it unravels the components of a complex moral problem. Poetic and lyrical yet provocative and insightful, Gattaca makes a measured statement on the impact of labels and the deception of appearances whilst pondering nature versus design and control versus fate, demonstrating each with apt shades of beauty and sadness. Boasting understated performances (with Hawke at his finest, Law perfectly petulant and Thurman suitably subtle), restrained direction (unable to be matched by the helmer in subsequent films S1m0ne and Lord Of War) and a majestic score (composed by Man On Wire‘s Michael Nyman), the fluidly futuristic, aesthetically intricate, symmetrically stylised and darkly comic fable succeeds as an evocative and engaging thriller as well as a tragic and timely social commentary.

In contrast to the control over conception conveyed in Gattaca, the thematically similar feature Children Of Men focuses on the impact of a global epidemic of infertility. Projecting forward to the year 2027, it depicts a society horribly crippled by the widespread inability to have children. With eighteen years passing since the last birth (of an Argentinian, bestowed the moniker “Baby” Diego by the press), and schools and playgrounds empty of the sound of youthful laughter, the devolution of the population mirrors its lack of growth. As governments collapse and cities stand in ruins, only Britain remains as the last of the functioning nations. Left with little else to do but wait as humanity heads towards extinction, widespread unrest emerges throughout the remnants of civilisation. Illegal immigrants and refugees are rounded up in prison camps, terrorists advocate for equality using violent means, and much of the desolate populace resorts to suicide. The only hope of survival rests with the mythical scientists of the Human Project, a group purported to be on the brink of remedying the fatal issue.

For former activist Theo Faran (Clive Owen, Shoot ‘Em Up), his apathy mirrors his inherent inability to effect change. Now working as a government bureaucrat, his life consists of a repetitive loop – occasionally interrupted by visits to his aging hippie friend Jasper (Michael Caine, Inception) – as he simply bides his time along with the rest of the population. Although his mindset was not always as downcast, the passing of his young son in the flu pandemic of 2008 and the split from his wife Julian (Julianne Moore, Chloe) that followed stripped him of any sense of optimism. Her unexpected re-emergence after a twenty-year absence sparks a new sense of purpose, despite the kidnapping (of Theo) that heralds her arrival. Pleading for his help to transport pregnant refugee Kee (Clare-Hope Ashitey, Exodus) and her escort Miriam (Pam Ferris, Gavin & Stacey) to meet the Human Project, Julian entrusts Theo with the most precious commodity known to man. With Kee’s progeny highly sought after by all aware of her secret – including Julian’s militant colleague Luke (Chiwetel Ejiofor, Salt), and an opportunist police officer (Peter Mullan, Harry Potter And The Deathly Hallows: Part 1) – the success or failure of Theo’s actions will consign humanity to its fate.

Loosely adapted by Cuarón and no less than four others from P.D. James’ novel “The Children Of Men”, the director’s sixth effort (with the likes of Great Expectations, Y Tu Mamá También and Harry Potter And The Prisoner Of Azkaban on his resume) is an impressive and intense affair. Capturing the immediacy of a society struggling to remain viable, the hard-hitting apocalyptic film combines the drama, thriller and sci-fi genres to offer a potent and powerful pondering of a future devoid of the one necessity that the human race takes for granted. Avoiding the exaggeration and reliance upon overblown technical wizardry that often comes with the territory, the feature instead allows the believable characters and compelling story drive the action. With Owen at his brilliant best, Moore underrated in support, Caine providing levity and the remainder of the outstanding cast infusing their roles with pathos, it has rightfully been lauded as a modern classic, a visionary masterpiece, and a sophisticated allegory. Smart and violent yet subtle and vehement, Children Of Men is an absolutely astounding cinematic achievement, with a final climatic sequence that ranks amongst the finest ever committed to celluloid.