Man of many talents: Five memorable performances from James Franco 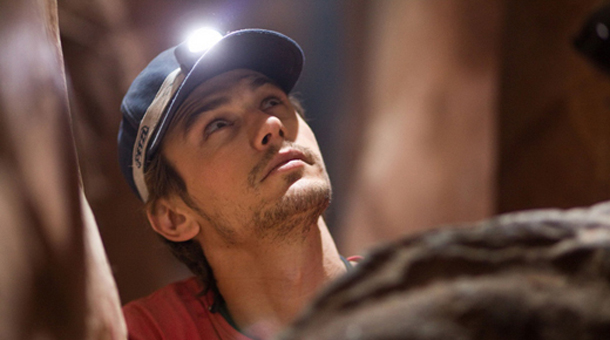 With every movie-related news story referencing James Franco of late – including rumours of his role in Sam Raimi’s The Wizard Of Oz prequel Oz: The Great And Powerful, his impending directorial involvement of Cormac McCarthy’s “Blood Meridian”, and even a college course collated by the actor based on his work – the fact that his latest film releases in Australia this week has hardly rated a mention. Indeed, despite an Oscar nomination for his portrayal of adventurer Aron Ralston in Danny Boyle’s riveting 127 Hours – representing the performance of the talented thespian’s career to date – most of the hype surrounding his involvement in the upcoming Academy Awards has focused on his status as co-host. Of course, multiplicity in his work is indicative of Franco’s resume, which also includes a published collection of short stories, a stint on U.S. soap General Hospital as an act of performance art, studying for his doctorate in English at Yale University, and the announcement of a role in the Broadway revival of “Sweet Bird Of Youth” opposite Rabbit Hole‘s Nicole Kidman. In celebration of his many talents, we take a look at five efforts from his wealth of film and television offerings, with each demonstrating his skill, style and versatility.

Freaks And Geeks: Garnering a cult following in just eighteen episodes, the 1999 television classic Freaks And Geeks cast aside the standard teenage stereotypes to craft a program steeped in the reality, not the fiction, of secondary schooling. Set in the early 1980s, the Paul Feig-created, Judd Apatow-executive produced offering centred on the high school experience of the Lindsay Weir (Linda Cardellini, Scooby-Doo), her younger brother Sam (John Francis Daley, TV’s Bones), and their respective groups of friends – the titular freaks (Franco, The Green Hornet‘s Seth Rogen, Forgetting Sarah Marshall‘s Jason Segel and Cougar Town‘s Busy Phillips) and geeks (Inglourious Basterds‘ Samm Levine and Party Down‘s Martin Starr). Although many of the cast moved on to bigger things, Franco’s success story is unparalleled. In the eleven years since the show left the air he may have progressed from playing a character imbued with unrealised potential to becoming a well-recognised overachiever, however underneath it all he will always retain an element of Daniel Desario’s cool and charismatic, relaxed and rebellious air.

James Dean: If Freaks And Geeks gave the world a glimpse of Franco’s acting nous, TV biopic James Dean provided a veritable smorgasbord of his depth and range. In a terrific turn as the tragic teen idol, he not only portrayed the man as the public knew him but also touched upon the myth behind the famous persona, in a performance both measured and suitably nostalgic. That his portrayal even made it to the small screen is no mean feat, with director Mark Rydell (Intersection) only coming on board after Michael Mann (Public Enemies), Des McAnuff (The Adventures of Rocky And Bullwinkle), Dennis Hopper (Dean’s friend and co-star in Giant and Rebel Without A Cause) and Milčo Mančevski (Before The Rain) abandoned the project. Under their respective influences, Johnny Depp, Brad Pitt, Leonardo DiCaprio, Stephen Dorff and Ethan Hawke were each considered for the lead, with Franco securing the part after attending an open casting call. Given his method-inspired, Golden Globe-winning (for best actor in a miniseries or television film) effort, it is now impossible to imagine anyone else as Dean apart from the legendary figure himself, in a testament to Franco’s pervasive prowess.

Spider-Man: Sam Raimi’s first three film installments of the superhero franchise may seem like ancient history now that Marc Webb’s reboot is underway (with The Social Network‘s Andrew Garfield and Easy A‘s Emma Stone taking over from Brothers‘ Tobey Maguire and Marie Antoinette‘s Kirsten Dunst), however they do bear revisiting less than a decade later (well, the first two at least). Often ignored is the factor that made Raimi’s works such a hit (and later Marvel movie Iron Man too) – the casting of impressive actors to breathe life into the comic book characters. Alongside Maguire as the web-slinger and Dunst as his lady love, Willem Dafoe played Peter Parker’s mentor Norman Osborn, and Franco the overlooked Osborn heir Harry. In a supporting yet pivotal role (obtained after screen testing for the lead), Franco invested pain and pathos into the minor part, succeeding again in the inevitable sequel. That his is the only performance of note in the lesser third entry speaks volumes of the actor’s skill, and inspires a contemplation of what the series may have been like if it had been his face instead of Maguire’s behind the heroes’ mask.

Milk: In bringing the life of the first openly gay Californian public official to the screen, it is understandable that the focus would fall firmly on the titular subject. Earning Sean Penn his second Academy Award (after Clint Eastwood’s Mystic River) for the portrayal of San Francisco city supervisor Harvey Milk, the importance and pertinence of the activist and politician’s plight transcends the boundaries of traditional biographical filmmaking, a feat only achievable due to the strength of the story. Yet, hidden beneath Penn’s naturalistic performance and Gus Van Sant’s tender direction is a cast of actors playing the figures that made Milk the man he was, including True Grit‘s Josh Brolin as his adversary, Speed Racer‘s Emile Hirsch as his protégé, and Franco as his encouraging lover. Although his finely-tuned turn as Scott Smith is commonly lost in the slipstream of Penn’s showier role, he still managed to secure an Independent Spirit Award win and several other nods for best supporting actor for his understated work, again exemplifying his versatility in parts of all shapes and sizes, as well as his ability to hold his own amidst formidable talent.

127 Hours: Many things have been said and written about 127 Hours, Danny Boyle’s incarnation of Aron Ralston’s autobiography “Between A Rock And A Hard Place”. Indeed, much of the press surrounding the film (including the trailer) has focused on the involvement of the Oscar-winning director, or the physical reaction many viewers have experienced (with fainting prominent), or the gruelling nature of Ralston’s story. At the centre of it all is Franco, in a role and a portrayal capable of providing a solid platform for the rest of his career. With his the only face on screen for much of the feature’s duration, it is through his expressions and mannerisms – essaying the entire gamut of emotions with ease, including anger and acceptance, optimism and insight, despair and determination, fear and frustration, regret and relief, and even joy and jubilation – that we connect with the harrowing nature of the ordeal. Whilst Boyle has crafted a visceral film resplendent with raw energy and even humour, it is Franco that compels with his multi-faceted performance of an adventurer forced to reconcile his lifestyle choices with his future as he faces his mortality – and my goodness, what a performance it is.

Of course, the above five offerings represent just a portion of the prolific actor’s output, with many other outstanding roles unable to be included on account of sheer numbers. From Robert Altman’s The Company to Paul Haggis’ In The Valley Of Elah, re-uniting with Apatow for a brief cameo in Knocked Up to earning a Golden Globe nomination for best actor in a musical or comedy in Pineapple Express, lampooning his image to hilarious effect in TV’s 30 Rock to re-teaming with Tina Fey as the highlight of Date Night, and perfecting the portrayal of Allen Ginsberg in Howl to never failing to surprise with his next project, Franco’s resume boasts a wealth of gold from his fourteen years in the public eye. With a bit part in The Green Hornet already under his belt in 2011, and fantasy comedy Your Highness as well as Planet Of The Apes reboot Rise Of The Apes on the way, his continued rise to prominence doesn’t appear to be coming to a halt any time soon. Indeed, it might be best to become accustomed to his easy on-screen charisma (and off-screen, too), as he’s certain to have many more films – and books, television series, art projects and the like – on the way.