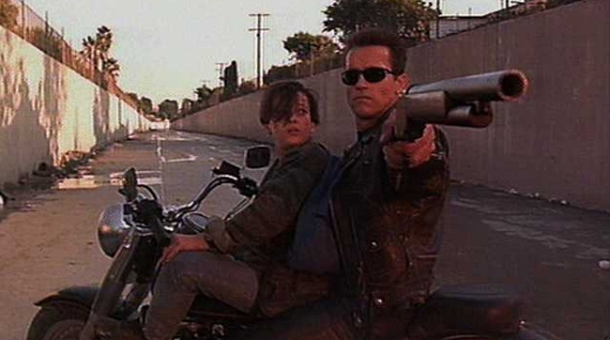 In the hierarchy of Earthly intelligence, humanity reigns supreme. With the smarts of the animal kingdom considered inferior to those of homo sapiens due to our mastery of language (rightly or wrongly), for millennia mankind has presided over the knowledge food chain. Of course, as our species continues to tinker with the best technology our minds can create, advancements in understanding are a foregone conclusion. As electronics gave rise to computing, and nanotechnology to miniaturisation, all manner of clever items made the leap from theory to reality. Amongst the ponderings traversing the void between fact and fiction, the creation of artificial intelligence has perhaps represented the holy grail of scientific discovery in the area. In recent decades, the concept has also provided ample fodder for our imaginations, including a burgeoning film subgenre devoted to the matter.

Indeed, as seen in Robert Wise’s The Day The Earth Stood Still, George Lucas’ original Star Wars trilogy, Ridley Scott’s Alien and Blade Runner, and the entire spectrum of Star Trek film and television offerings, the very topic of computerised intellect has fuelled science fiction features for some time. The various incarnations of Battlestar Galactica, Dune and The Hitchhiker’s Guide To The Galaxy have also considered the subject, as have efforts as varied as Isaac Asimov adaptations Bicentennial Man and I, Robot, and Stanley Kubrick’s 2001: A Space Odyssey and A.I. (with Steven Spielberg eventually taking the director’s credit on the latter after Kubrick’s passing). 1980′s TV programs Red Dwarf, Knight Rider and Transformers can be added to the mix, along with animated pieces Astro Boy, Ghost In The Shell and Wall-E. Ranging from Forbidden Planet to Short Circuit, Robocop to The Matrix trilogy, and Virtuosity to Eagle Eye, the concept of the mechanical mind has regaled auteurs and audiences, with the possibilities seemingly endless.

In 1984, writer / director / producer James Cameron made his own contribution to the canon. With a single feature-length film to his name (1981′s Piranha II: The Spawning), the filmmaker unleashed sci-fi action thriller The Terminator upon the unsuspecting public. A low-budget offering barely expected to make a cinematic splash, it spawned a successful franchise (in both the film and television realms) to become the project most likely to be seen as his legacy (even with Titanic and Avatar on his resume). Exploring artificial intelligence with insight and suspense, the movie both paid homage to and subverted genre conventions, combining tension with technology whilst demonstrating humanity and humour. Defining the “man versus machines” narrative thread for the features that followed, Cameron’s film contemplated the survival of the species, the fight or flight tendency of the populace, and the encroaching impact of man-made intellect. It is his vision of the future that the generations that follow may well remember, courtesy of the enduring popularity of his creation.

In the film that started the franchise, we meet 19 year-old waitress Sarah Connor (Linda Hamilton, Children Of The Corn) as she goes about her daily life. Sharing a flat with colleague Ginger (Bess Motta, Seed Of Innocence), she rushes home from the diner grind to get ready for a date. When her gentleman caller cancels at the last minute, Sarah seeks the comfort of a boring Friday evening movie instead. Alas, an unnamed man on a killing spree has other ideas for Ms Connor, as he hunts down all Los Angeles residents with her moniker. As Detective Hal Vukovich (Lance Henriksen, Dog Day Afternoon) and Lieutenant Ed Traxler (Paul Winfield, Star Trek II: The Wrath of Khan) piece together the connection, the gigantic figure makes his move on Sarah. Saved by the intervention of a mysterious stranger, her life is spared, yet her story doesn’t end there. The man intent on ending her existence is the titular terminator (Arnold Schwarzenegger, Conan The Barbarian), a Skynet cyborg – or cybernetic organism to be precise – sent back from the post-apocalyptic time of 2029 to kill the mother of resistance warrior John Connor. Following his movements is fellow traveller Kyle Reese (Michael Biehn, Navy Seals), her human protector sent by her as-yet-unborn son. Together, Sarah and Kyle must evade and destroy their pursuer, with the future of humanity dependent upon their actions.

Set eleven years after the first installment yet made only seven years later, Terminator 2: Judgment Day follows the plight of John Connor (Edward Furlong, in his debut role) as a youngster. With his mother in psychiatric care for suspected schizophrenia and paranoid delusions, and his foster parents (Lethal Weapon 2‘s Jenette Goldstein and The Grifters‘ Xander Berkeley) barely concerned for his safety, the ten year-old is forced to rely on his street smarts to get by. When a new terminator, the advanced T-1000 (Robert Patrick, Cop Land), is sent back in time to eradicate the boy, his future self also sends an original as his guardian. Although the latter looks identical to the model that terrorised his mother (with Schwarzenegger reprising his role), his mission is to protect rather than terminate young John. Startled to discover the truth of the stories Sarah shared with him as a child, he enlists his new friend’s help to free her from state care. Together, the trio set their sights on bringing down the corporation behind the robotic uprising that sparked the chain of events, with scientist Miles Dyson (Joe Morton, Forever Young) the key figure in crafting an ideal or dystopian vision of the future.

With the narrative built upon the ashes of nuclear warfare, the two films that comprise the strongest offerings in the six-part series (four features and two television programs) explore the plight of mankind under the control of computerised intelligence. Although the horrific circumstances are yet to eventuate in either movie, the events that unfold are paradoxically caused by the apocalypse to come (a suspension of disbelief is required, as the ability to overlook the many occurrences rendered impossible by basic causality). Matching sequences of the future (distinguished in presentation by budget and effects capabilities) provide a glimpse of the ordeal that Sarah is fighting to avoid, first with Kyle, and then with her son John by her side. Each builds a sense of urgency into the complimentary efforts, which is cemented by the dual use of the chase premise. Accordingly, Schwarzenegger’s T-800 and Patrick’s T-1000 not only drive the action forward in their respective relentless pursuits of Connor family members, but also provide an on-screen representation of the otherwise faceless evil (the Skynet Corporation) responsible for pushing humanity towards such a dire fate.

Indeed, in the construction of both films, Cameron and his co-scribes Gale Anne Hurd (better known as a producer of efforts such as Armageddon) and William Wisher, Jr. (Judge Dredd) appear to have gone to great lengths to employ symmetrical symbolism in their depiction of the machines and their human prey. In the iconic opening sequence of The Terminator, both the synthetic and organic travellers from the future arrive in the past in their natural state, with the film commencing with their rebirth of sorts. As the former locates suitable clothing via intimidation (of a gang of street punks, including a very young Bill Paxton), his transformation from innocent to attacker is complete. The hunt then begins in earnest, with the mature foe hunting his youthful target whilst evading his fellow futurist. Terminator 2: Judgment Day repeats the process, whilst swapping focus from the villain to the hero, as seen in the cult “I need your clothes, boots and your motorcycle” scene. Commonalities are also apparent throughout each feature, in the framing of Sarah and John as well as their reactions and expressions, the interplay between both and their protectors (“Come with me if you want to live”), and in the ultimate showdown sequences.

Accordingly, other than playful instances of misdirection in the initial scenes of both films, the two features make no mistake in casting mankind and the machines into the guises of the good and bad guys. Comparable to genre compatriots in cultivating the public fear of technology, the dichotomy between both sides is simple and self-evident, with the righteous humans and the evil computers well established. Never straying away from the basic paradigm, Cameron instead attempts to invest thrills – rather than innovation – into the formula. In the first film he succeeds in spades, with the concise effort both tense and gripping whilst following action conventions and investing intelligence into the sci-fi premise. Sadly, although more arresting on the visual front, the second does not fare as well. Instead, the too slick feature complicates its story within the black and white boundaries, confusing quantity (or length) for quality. Of course, this view is far from a popular one, with the sequel often held up as the highlight of the series. Alas, whilst it looks the part, it lacks the depth, focus and subtlety inserted in the economic initial offering, as well as the emphasis on characters over set pieces.

The respective merits of the individual efforts aside (with both eclipsing Terminator 3: Rise Of The Machines, Terminator: Salvation, Terminator: The Sarah Connor Chronicles and Terminator: Salvation – The Machinima Series), their strength as a double feature is beyond reproach. With the first establishing the fantastic, cataclysmic concept and the second working within the defined parameters, they propose a vision of the future filled with both terror and hope. The powerful dystopian imagery itself (both displayed and evoked through description) is not easily forgotten – particularly the prologues and opening sequences, nor is the idea behind the films, or the many paradoxical narrative loops. However, even with forgivable flaws the duo stands out as a haunting fictional foreshadowing of a potential outcome of humanity’s obsession with technology, as well as an impressive indicator of the type of filmmaking Cameron is best suited to (with Aliens and The Abyss also belonging in the same category). Questioning our destructive tendencies whilst probing our fears and mortality, both The Terminator and Terminator 2: Judgment Day represent and ponder the perpetual necessity to make the sanest choice in an insane world.