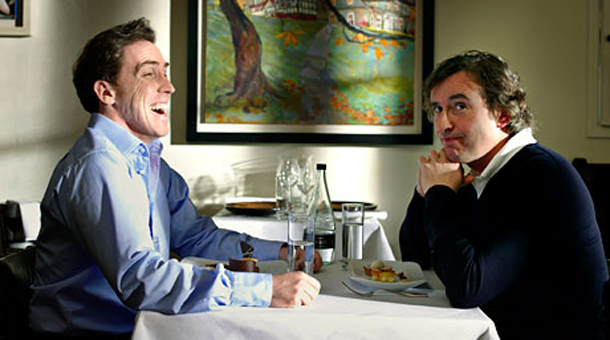 Whilst neither are household names outside their home continent, comedians Steve Coogan and Rob Brydon have enjoyed fruitful careers for over two decades. From the small screen to the larger canvas, each has carved a comic niche based on characters and impressions, in both separate and combined artistic forays. The former is perhaps still best known for his turn as iconic talk show host Alan Partridge in The Day Today, Knowing Me, Knowing You and I’m Alan Partridge, whilst the latter ranks amongst the most beloved Welsh exports courtesy of his role as Uncle Bryn in sitcom Gavin & Stacey. Together they’ve tackled the Manchester music scene in 24 Hour Party People, and the fictional side of their celebrity personas in Tristram Shandy: A Cock And Bull Story, both with the help of eclectic English director Michael Winterbottom (The Killer Inside Me). Culinary road trip series turned feature film The Trip marks the duo’s third collaboration with the filmmaker, and their second instance of playing exaggerated versions of themselves under his watch. A condensed cinematic version of the six-part BBC series, the film combines the best of the multi-episode effort for the international market.

In an attempt to impress his gourmand American girlfriend Mischa (Margo Stilley, 9 Songs), and as a way of filling in time during a slow spot in his assured ascent to global stardom (in his own mind, anyway), Steve Coogan agrees to participate in a restaurant tour of the north of England for The Observer newspaper. When their relationship hits a rough patch mere days before the trip is due to take place, Coogan is forced to find a last-minute replacement, convincing his friend and colleague Rob Brydon to leave his wife and newborn for a week in the country. Sampling the region’s most acclaimed and infamous eateries over eventful journey, the pair wax lyrical about life and love as they traverse the sights and scenery of the English Lakes District. Contemplating their careers and achievements on both the personal and professional levels, the pals trade impersonations and take stock of their situation over a series of gourmet dinners.

Television creations have often provided the basis for film continuations, with sequels, prequels and remakes making the leap from the small to the big screen. Cult programs Star Trek, Firefly, The X-Files and Twin Peaks saw their storylines extend in the larger format, with many other prematurely cancelled series apparently earmarked for the same treatment (with the rumoured Buffy The Vampire Slayer and Deadwood movies failing to eventuate, and Arrested Development and Party Down features reportedly in the works). Whilst animated serials such as Inspector Gadget, The Flintstones, Scooby Doo and of course Transformers have proven the most popular of transitioned content, everything from the crime to stunt genres have tried their hand. British comedies have added their own feature offerings to the mix, ranging from Monty Python’s Flying Circus to Mr Bean, Da Ali G Show to The Thick Of It, and the upcoming The In-Betweeners to The Trip.

Retaining the unique English sense of humour that is prevalent in the sitcom format, the feature version of The Trip champions the series’ insights into the nature of fame, friendship and food. Within the context of a situation only available to the well-known and wealthy, the partly improvised effort explores the impact of the spotlight on two very different celebrity characters. The contrasting styles of the performers assists in this regard, with Coogan happy to skewer his notorious reputation, and Brydon proliferating his on-screen persona as the down-to-earth foil. As they traipse from restaurant to restaurant, the former’s ego provides the source of many an outlandish moment, with the latter’s reassuring normality promoting the perfect comic balance. As such, the film is driven by personality, with the story admittedly rather slight. Instead, the amusing feature emboldens the actors to extemporise their conversations, with witty bickering and banter about encroaching age, unsatisfying job offers and impressive imitations the fodder of their meal-side chats. Whilst its televisual origins are ever apparent, the condensed effort sparkles with amusement and shines with entertainment, in a stellar offering from the long-term colleagues. Dividing its time between epicurean delights headed for the stomach and emotive affairs of the heart, The Trip is a jovial journey worth taking.