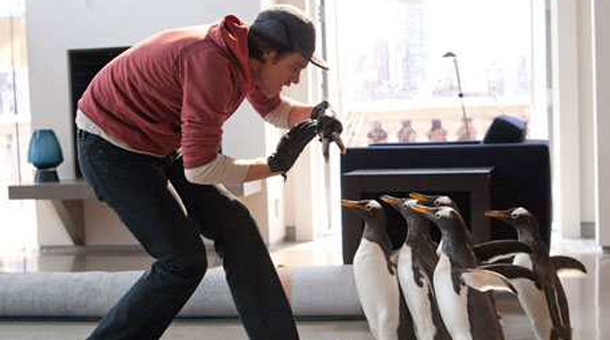 Although the old entertainment adage advises actors to avoid working with kids and animals, in the realm of family films both elements are essential and unavoidable. Indeed, a quick survey of the youth-friendly fare that has adorned cinema screens come school holiday time in the last twelve months uncovers ample helpings of both, with any deficiencies made up for by animation. On the adolescent front Toy Story 3, the Diary Of A Wimpy Kid duo and Mars Needs Moms have the situation covered, whilst Shrek Forever After, Marmaduke, Cats & Dogs 2: The Revenge Of Kitty Galore, Yogi Bear, Hop, Rio and Kung Fu Panda 2 have taken care of the cute critter quotient. Whilst heavily reliant on the broad appeal of its star Jim Carrey, the film adaptation of Richard and Florence Atwater’s 1938 classic Mr Popper’s Penguins combines both children and cuddly aquatic creatures for a feel-good family frenzy tailor-made to entertain parents and their vacationing progeny.

Tom Popper has grown from an enthusiastic youngster (Dylan Clark Marshall, Arthur) to a cynical real estate broker (Carrey, A Christmas Carol), with his adventurer father’s absence throughout his childhood still playing on his mind. When Mr Popper senior passes away on another of his exotic trips, he leaves Tom with a parting present in the form of a lone penguin to keep as a pet. Attempting to return the flightless bird, he inadvertently adds five more to his brood, with his New York apartment quickly thrown into chaos. Juggling a professional promotion opportunity predicated upon procuring a Central Park restaurant that holds sentimental value, and the demands on his ex-wife (Carla Gugino, Sucker Punch) and two children (Madeline Carroll, The Spy Next Door and Maxwell Perry Cotton, TV’s Brothers & Sisters), the younger Mr Popper is at first reluctant to bond with his new charges, but soon learns the value of keeping an open mind.

Over a career spanning thirty years Jim Carrey has presented two distinct screen personas to the world. Although his serious work has attracted applause and acclaim (including a BAFTA best actor nomination for Eternal Sunshine Of The Spotless Mind, and Golden Globe wins for Man On The Moon and The Truman Show), audience acceptance of his silly side, first glimpsed in Ace Ventura: Pet Detective, has grown to dizzying heights. With the box office success that has followed The Mask, Dumb And Dumber, Liar Liar, Bruce Almighty and Yes Man an obvious indicator of his amusing infamy, it comes as no surprise that these roles take pride of place on his resume. For every indie meandering such as I Love You Phillip Morris, there’s a family feature in the style of The Grinch and a comic mis-step of the type of Fun With Dick And Jane, with the humorous rather than human elements considered by the cinema-going public to be a highlight of his work to date.

Mr Popper’s Penguins presents a cookie-cutter case of Carrey’s craziness being forced to carry a film, with his winning ways with younger and older demographics the centrepiece of the movie. Whilst the feature finds its basis in the pleasant seventy year old source material, director Mark Waters (Ghosts Of Girlfriends Past) and writers Sean Anders, John Morris (collaborators on Hot Tub Time Machine) and Jared Stern (The Princess And The Frog) have made a multitude of modernising changes to ensure that Carrey’s histrionics are front and centre for the entire film. As such, viewers should expect the usual exaggerated antics of the rubber-faced, physically adroit funnyman, with the addition of his attempts to ape penguin behaviour to his standard repetitive repertoire. Whilst elements of the presentation raise a smirk or even a giggle (including the alliteration efforts of Popper’s pithy personal assistant, played by No Strings Attached’s Ophelia Lovibond), and the titular creatures charm as anticipated, there’s no mistaking this saccharine star vehicle for anything other than middle of the road school holiday fare that might even inspire a few pet purchases. 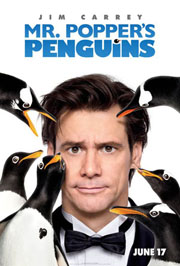