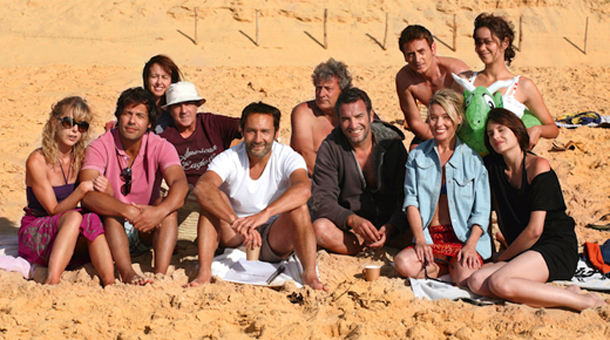 Whilst many films focus on a central protagonist or couple, others rely on a collection of characters to share the focus of the story. Since Akira Kurosawa’s The Seven Samurai and Sidney Lumet’s 12 Angry Men, ensemble features have emerged as a collegial alternative to star vehicles, or simply provided opportunities to boost a film’s cast. Transcending genre, infamous ensemble efforts include the original incarnation of rat pack comedy Ocean’s Eleven (and subsequent remake, and sequels), John Hughes’ seminal teen flick The Breakfast Club, and Steven Spielberg’s war offering Saving Private Ryan. Others that have embraced the format range from Love Actually to Crash and The Departed to Inception, whilst directors such as Woody Allen (Hannah And Her Sisters, Vicky Cristina Barcelona), Robert Altman (The Player, Gosford Park), Paul Thomas Anderson (Boogie Nights, Magnolia) and Quentin Tarantino (Reservoir Dogs, Inglourious Basterds) have made it the basis of their careers. Yet, amongst all the other features, The Big Chill often springs to mind when the word ensemble is floated about. The 1980s drama that countless others have attempted to mimic still holds considerable sway close to three decades later, with French film Little White Lies ( Les petits mouchoirs) the most recent film to follow in its footsteps.

A gathering of friends dance and drink the night away at a Parisian nightspot, with their intimacy and obvious affection apparent to all. Then comes the morning, and the news of an accident that shatters their fragile illusion. With the group’s centre of attention Ludo (Jean Dujardin, A View Of Love) colliding with a truck whist scooting home, their dynamic is thrown out of balance. Yet, even with their friend in hospital, their thoughts turn to an impending holiday at the summer home of restaurateur Max (François Cluzet, Paris). Agreeing that there is little they can do for Ludo whilst he remains incapacitated, the gang heads away, with out of sight firmly proving out of mind. Instead, Max reacts badly to the advances of long-term pal Vincent (Benoît Magimel, The Piano Teacher), much to the confusion of their respective wives (Summer Hours‘ Valérie Bonneton and Coco‘s Pascale Arbillot). Ludo’s ex-girlfriend Marie (Marion Cotillard, Nine) worries about her romantic entanglements, as do the lovesick duo of Eric (Gilles Lellouche, Public Enemy #1) and Antoine (Laurent Lafitte, A Secret). Only Max’s childhood buddy Jean-Louis (Joël Dupuch, Tell No One) remains grounded amidst the interpersonal mayhem, with the ties that bind the group truly tested.

The third feature from writer / director Guillaume Canet after Whatever You Say and Tell No One, Little White Lies doesn’t dare to stray far from its American inspiration. Instead, the latest effort from the actor turned filmmaker (with Farewell his last notable on-screen role) is content to recreate Lawrence Kasdan’s hit, from the tragedy that brings the group together to the expected cathartic ending. With the addition of French sensibilities, a seaside location and an extended running time, the film unravels the anticipated interactions. Latent feelings surface, problems arise and are overcome, and friendship is forced to the fore. Amongst the predictable, pedestrian and pottering action, the cast try their best, with Cotillard again in top form. Under her partner Canet’s watchful eye, she provides the feature with a much-needed sense of energy, overcoming the stereotyping of her character to draw the viewer away from the brink of boredom. Yet, even her charms and the efforts of Cluzet and Magimel as bickering buddies, and Lellouche and Lafitte as pining pals, are unable to counter for the considerable contrivances and convenient twists and turns. An indulgent ensemble exercise about the realisations that come with encroaching age, Little White Lies is – like its collection of protagonists – too caught up in its own dramas to see the bigger picture. 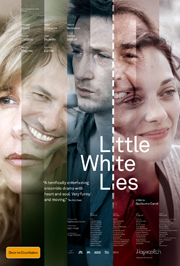