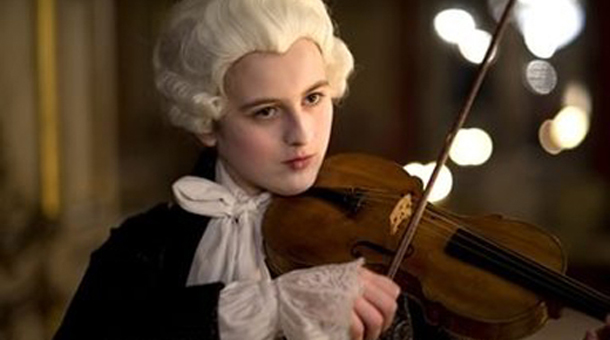 In the three centuries since his death, Wolfgang Amadeus Mozart has evolved from a celebrated composer to an icon of music culture. From literature (Eduard Mörike’s “Mozart’s Journey To Prague”) to theatre (Aleksandr Pushkin’s play “Mozart And Salieri”), computer games (Commodore 64 title “Amadeus Revenge”) to children’s television (German series Little Amadeus), and opera (French musical “Mozart, l’opéra rock”) to music (Austrian pop hit “Rock Me Amadeus”), his work has inspired countless others, and his name has adorned various pieces of artistry. The cinematic medium has also dabbled with the Salzburg-born musician, with Milos Forman’s 1984 Academy Award winning Amadeus amongst the most notable. Indeed, film biopics have appeared on the big screen since the early days of the twentieth century, including 1909′s Mozart’s Last Requiem, 1921′s Mozarts Leben, Lieben und Leiden and 1936′s Whom The Gods Love, as well as 1948′s The Mozart Story, 1975′s Mozart In Love and 1985′s Forget Mozart. Mozart’s Sister (Nannerl, la soeur de Mozart) is the latest feature to delve into the life and times of the prolific and popular figure, all the while relegating his youthful screen incarnation to a supporting role. Instead, as the title intimates, the film follows the teenage years of Maria Anna (nicknamed “Nannerl”) Mozart, as she tries to step out of her Wolfgang’s shadow.

Sharing the family affinity for all things musical, Nannerl Mozart (Marie Féret, daughter of director René) demonstrates a mastery of the harpsichord and fortepiano at any early age. Alas, after years touring Europe, her days sharing the spotlight as a child prodigy with brother Wolfgang (David Moreau) are numbered, with her sibling thrust into the focus due to his relative youth and masculine gender. With their father Léopold (Marc Barbé, La Vie en Rose) desperate for glory amongst their audience of royalty and aristocracy, and their mother Anna-Maria (Delphine Chuillot, Pandorum) happy to acquiesce, Nannerl is relegated to accompanying Wolfgang, although her supplementary skills are soon cast aside. Instead, as she approaches womanhood tradition deems her fit only to seek a husband, with success in her own right nothing more than a fantasy. When the family carriage breaks down en route across France, a fortuitous meeting sees friendship bloom between Nannerl and Louise de France (Lisa Féret, playing opposite her sister), sibling to Le Dauphin (Clovis Fouin). An ensuing encounter in Versailles with the heir apparent to the throne awakens an affection for both music and each other, with the boundaries of status and expectations of society thwarting a relationship sparked from subverting convention.

Appropriately for a feature that delves into family dynamics, Mozart’s Sister represents the combined efforts of the Féret clan. With René taking on writing, directing and producing duties (as well as appearing in the movie as as a music professor), his wife Fabienne co-producing and editing, son Julien serving as assistant director as well as featuring in a bit part, and daughters Marie and Lisa in starring roles, the film bears all the hallmarks of a labour of love from an artistically inclined tribe. However, as is often the case in any creative endeavour, their apparent passion for the subject and format is somewhat muted on screen. Despite spirited efforts, much of the uneven offering stems from the work of the two girls, with their sole acting experience in their father’s films L’enfant du pays and Il a suffi que maman s’en aille… obvious in wooden performances for all to see. Thankfully, the largely theoretical tale of Nannerl’s teenage years (including the fabricated liaison with the son of Louis XV) is appropriately involving, dwelling in the melodramatic realm of historical fiction often seen associated with the English monarchy. The underplayed underlying themes of female subjugation and hierarchical submission also prove well-handled, in a pleasant and predictable excursion into an overshadowed figure. 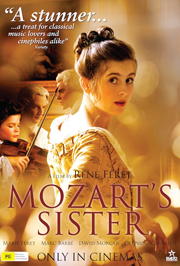