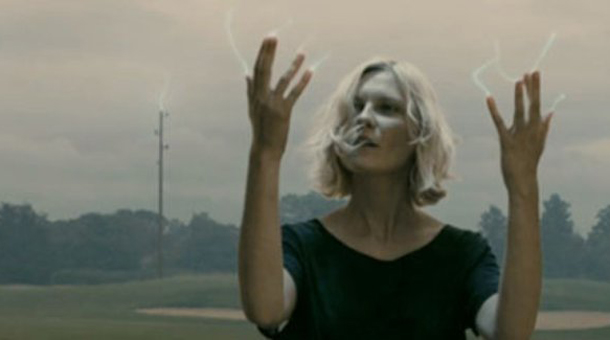 With divisive efforts Breaking the Waves, Dancer in the Dark and Antichrist on his extensive resume, the announcement of each new project by Danish writer/director Lars von Trier is often met with caution from the collective film community. Polarising industry pundits and audiences alike with his actions both behind and in front of the camera, von Trier’s movements over a three decade career have caused much discussion regarding the man, his movies and their merits, with every subsequent release re-igniting the debate.

After the controversy that followed his comments at the world premiere of Melancholia at Cannes in May, tensions remained heightened, even after the film’s star Kirsten Dunst became the latest in a long line of Lars’ leading ladies to take home a coveted best actress statuette from the festival. Thankfully, the feature itself allows anticipation-afflicted viewers a reprieve from anxiety, in an accomplished and ambitious exploration of the extremes of the emotional spectrum set against a suitably apocalyptic science fiction premise.

In a tale of two distinct halves, Melancholia focuses on two dissimilar sisters (Dunst, in career-best form, and von Trier’s Antichrist star Charlotte Gainsbourg), retaining the auteur’s signature focus on the journey of struggling females. Contemplating the psychological space between happiness and hopelessness, the film charts the emotional arcs of the seemingly opposing siblings, with their respective erratic and calm exteriors concealing a hidden capacity to embrace and embody the traits of the other in the appropriate context.

Two significant events provide the catalyst for the contrast in coping mechanisms between Dunst’s melancholic Justine and Gainsbourg’s constrained Claire, with the film juxtaposing the contrivances of an elaborate wedding with the impending end of the world. Populated by an eager groom (Alexander Skarsgård), eccentric parents (Charlotte Rampling and John Hurt) and arrogant brother-in-law (Kiefer Sutherland) in the first half, before making room for an intimate examination of the family dynamic in the second section, the cleverly compelling film captures attention from the operatic opening to the moving conclusion.

Although running for 136 minutes, Melancholia avoids the lethargy and repetition the longer length often brings, as well as the ire and alarm that commonly accompanies the director’s work, and the contrivance and cliché the sci-fi leanings could have inspired. Instead, even with the familiar emotional arc, the enthralling effort ranks amongst his astounding best; a stunningly serene cinematic experience to cherish. 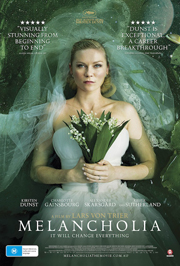