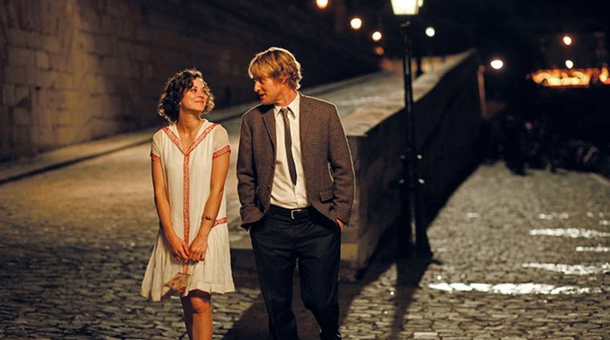 After decades shooting and setting films in his native New York, Woody Allen’s 21st century work has been infused with a European flavour. Following the unenthusiastic reaction to his recent American comedies (including the box office failure of his most expensive offering, The Curse of the Jade Scorpion), he travelled to London for Match Point, Scoop and Cassandra’s Dream, and to southern Spain for Vicky Cristina Barcelona. For his 41st feature, Allen explores the City of Light in Midnight in Paris.

Allen’s latest filmic stand-in embodies his journeying spirit, seeking inspiration in the titular city. Alas, instead of finishing his first novel, screenwriter Gil (Owen Wilson, Cars 2) argues with his mismatched fiancée (Rachel McAdams, Morning Glory) and her arrogant acquaintance (Michael Sheen, TRON: Legacy), under the dismissive gaze of his future in-laws. When an opportunity arises for a solo evening stroll through the streets, Gil welcomes the chance to indulge his creative side. His wanderings take him off the beaten path, with 1920s encounters with his idols his unlikely late night destination.

From the lengthy opening sequence that doubles as a love letter to the picturesque locale, to the effortless recreation of the dimly lit France of times gone by, Midnight in Paris is the ultimate tourist film. However, instead of a simple depiction of sightseeing in a foreign country, writer/director Allen injects the extra dimension of visiting a different time period to the equation, adding a fantastical twist to the charming romantic comedy.

Evoking the heyday of the famed Lost Generation – complete with appearances by F. Scott Fitzgerald (Tom Hiddleston, Thor), Gertrude Stein (Kathy Bates, The Blind Side) and Salvador Dalí (Adrien Brody, Predators) – the feature contemplates the idealisation of the past. To enunciate the point, Allen confidently crafts a carefree courtship with muse Adriana (Marion Cotillard, Little White Lies) across temporal boundaries, with his protagonist forced to confront his amorous and artistic future.

Accordingly, Midnight in Paris dissects the intersection of dreams and reality, with the outcome nostalgic yet nuanced, and reflective yet resonant. Although predicated upon a slight narrative device, the film is insightful and attentive, from the period recreations to the character conflicts. Boasting exceptional acting and effervescent direction, the resulting effort is pleasantly sentimental and playfully surreal, as well as sweet, stylish, smart and sublime. A beautiful, beguiling Parisian postcard, the funny, finessed feature exemplifies Allen at his European best. 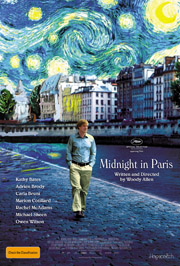