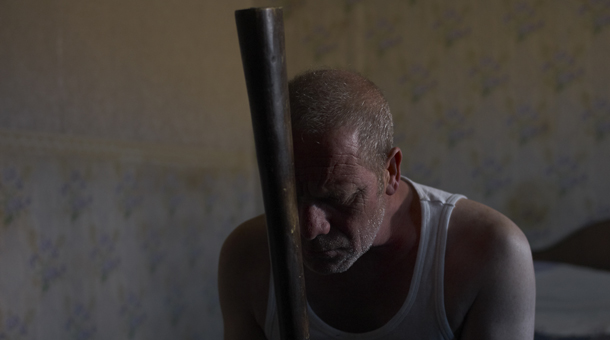 Many have endeavoured to make the journey from in front of the camera to behind it, from greats Clint Eastwood and Ron Howard, to challengers George Clooney and Ben Affleck. Joining the long list of thespians to have tried their hand at helming, acclaimed English actor Paddy Considine expands upon an impressive career by demonstrating his skill in the director’s chair. After writing Shane Meadows’ Dead Man’s Shoes, and shooting the short Dog Together, Considine now attempts his first full-length feature. A visceral exploration of the impact of violence, Tyrannosaur exposes the underside of British poverty.

Best suited to his own company, Joseph (Peter Mullan, Neds) seeks solace at the bottom of a bottle, with his faithful canine his only offsider. When a drunken outburst destroys even that relationship, Joseph is inspired to alter his behaviour, forging a bond with a local charity shop worker. Although the kindly Hannah (Olivia Colman, The Iron Lady) nurtures the friendship, her benevolence masks hidden pain. Suffering in a strained marriage to the unpleasant James (Eddie Marsan, Sherlock Holmes), she struggles in silence, until her new companion elicits change.

With a versatile cinematic catalogue that includes 24 Hour Party People, In America, Hot Fuzz, and The Bourne Ultimatum, Considine is renowned for his on-screen prowess. Based on the merits of his brave and brutal directorial debut, he deserves to be known for his filmmaking skills as well, for Tyrannosaur is a polished, powerful feature.

Re-teaming with the familiar faces of former co-stars Colman (Le Donk & Scor-zay-zee), Mullan and Marsan (The Red Riding Trilogy), the actor turned director examines the interaction of two people cast into the roles of villain and victim in their own lives. However, those bounds are transcended as the lost souls find a connection, with the uncompromising yet commanding feature exploring the truth and tragedy that lies behind the constructed facade of even the most imposing and innocuous of people.

Boasting Mullan at his magnetic, measured best as the afflicted aggressor, and Colman conveying both tenderness and toughness as the tortured target, the film rests on their portrayals, as Considine inspires his cast to haunting yet heartfelt performances. Their combined efforts comprise a harrowing portrait of the problems of ordinary Britons, as well as a hopeful message of the resilience of the human spirit, with Tyrannosaur being compelling, confronting, contemplative and even – unexpectedly – cathartic. 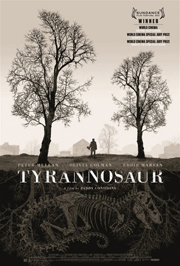