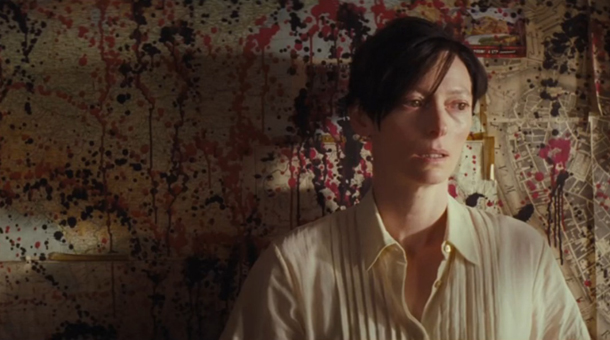 As fundamental to film as to family, motherhood has inspired countless features. Weepies (Terms of Endearment), comedies (Freaky Friday), indies (Juno) and dramas (Mommie Dearest) have all explored the bond between mothers and children, with atypical instances occurring in the science fiction (Aliens), thriller (Mother) and horror (Rosemary’s Baby) genres.

In bringing Lionel Shriver’s Orange Prize-winning novel to the screen, Ratcatcher and Morven Callar director Lynne Ramsay’s latest bears more than a passing resemblance to Roman Polanski’s seminal effort, similarly dwelling in the realm of domestic discordance. However, instead of chronicling the fears of a pregnant mother for her unborn child, We Need To Talk About Kevin charts the growing disconnect that occurs between Eva Khatchadourian (Tilda Swinton, I Am Love) and her titular son after his arrival, amidst mounting fears that something is not quite right.

Fiercely independent and intelligent, Eva’s courtship with Franklin (John C. Reilly, Cedar Rapids) culminates in Kevin’s birth. Whilst he dotes over the mischievous toddler (debutant Rock Duer), she keeps her distance, with the disharmony continuing throughout Kevin’s (now played by fellow first-timer Jasper Newell) childhood. As the boy ages, the chasm widens, manifesting in a malevolent streak only his mother can discern. As a teenager (Ezra Miller, City Island), his actions leave a lasting impact, with the family forever changed by the events approaching his 16th birthday.

Relating Eva’s story by juxtaposing the past and present, We Need To Talk About Kevin seethes tension in every frame. Exploring the concerned protagonist’s attempts to cope with her own culpability in her offspring’s activities, the film weaves a web of psychological suspense that leaves a nightmarish imprint on the watching audience. To this effect, Ramsay uses every tool at her disposal, from the foreboding prominence of red, to the purposefully fractured presentation, to Johnny Greenwood’s haunting score. The final product is a provocative contemplation of nature versus nurture, played out to the most unsettling extreme.

Whilst it is Kevin’s name in the film’s moniker, there is never any doubt that his mother is the focus. In inhabiting the conflicted matriarch, the ever-impressive Swinton turns in a performance that exceeds her Oscar-winning best, amply personifying the feature’s balance of raw and restrained emotion. Her evocative efforts are masterful and mesmerising, mirroring the entire composition of the menacing movie. Inescapably affecting and expertly executed, We Need To Talk About Kevin is a deftly disturbing and devastating picture of parenthood. 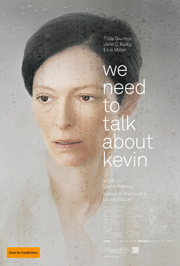